What My Car Accident In France Taught Me

This post arrives to you from the Heather of Experience who has a tale to tell about a car accident in the French countryside en route to a clandestine munitions drop site that will appear in the biography she’s writing (on deadline, naturally).

So, Zach (the husband) and I were driving through the narrow, winding, gravelly, dusky roads of Le Chambon, a gorgeous town nestled in the Haute Loire. This is where Virginia Hall, the subject of my biography, helped to organize the French resistance for DDay. I was feeling elated because we’d just seen one of the houses she’d stayed in and done wireless transmissions to London from, and, as swing music played on the radio, could almost imagine we were back in time as we slid down the same roads she once bicycled through herself (with ONE leg, mind you). I was so HAPPY because I’ve done a pretty terrible job with this book, so overwhelmed with other deadlines and moving out of the country and being in over my head with this project, which is so vast in scope, and I felt like something had finally come together. Some bit of luck, which is what being an agent in the field, I hear tell, is what it often comes down to. And I literally said these words: “The universe threw me a major bone.”

And then there was the sound of crunching metal.

And also: I’m not terribly convinced the universe is in the business of throwing bones my way and, if it is, it’s certainly interested in keeping the freaking scales even steven.

We got in one of those car accidents that you see on TV, where one car is going one way, and another is going the opposite, and it comes out of nowhere and usually one of the characters in the car dies. Luckily, everyone was okay and the cars were actually not too bad, considering. It could have been so much worse.

This post isn’t really about the accident, but the after. 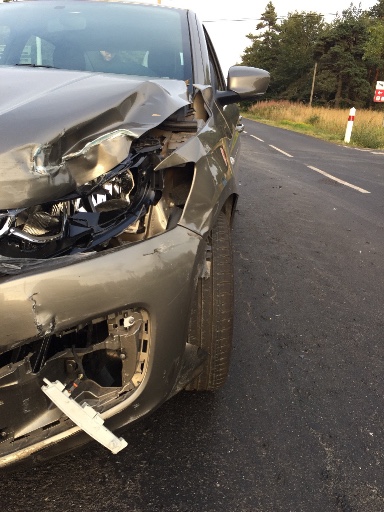 See, we were in a foreign country. In a rental car. We had paid for the CHEAP insurance with the high deductible. The people in the other car didn’t speak English and our French is merde. It was getting dark and we were in the middle of nowhere and it was cold. We were also on a time crunch, at the beginning of a very long trip, on a very limited budget. This could have been so, so bad.

But what happened was this:

1. Gratitude – everyone was okay. It was my first thought. Not anger or fear, but just relief.

2. Kindness – the French man and his family were lovely. So understanding, so kind, so generous.

3. The tow truck that picked us up – also kind. They offered to drive us home, since the taxi would likely never show up. They made us laugh along the way.

4. My usual response would have been blame or anger or freaking out or just being really pissed because I’d expected to be doing X or Y or Z but now I was on the side of the road, but this is what I did. I took out my notebook (writer), and I looked around me. 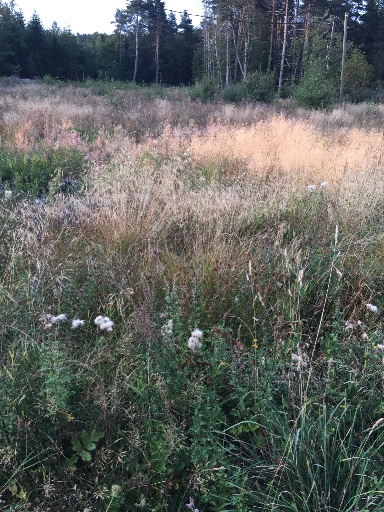 I wrote a list of what I saw and smelt and heard: crisp air, stone farmhouses, pine trees, purple wildflowers, the scent of manure, tractors carrying bales of hay…I knew I would use it in my book. Or not. But at least I knew I was here and that, despite what was happening, I was in the beautiful French countryside, safe and alive, and in the end it was really okay. And that was really all that mattered. (See my Insta Story below, for my August Break Mindfulness project). 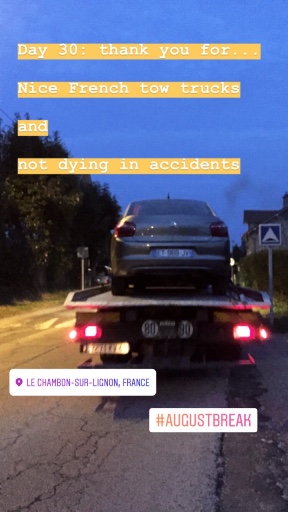 The accident set off a slew of stressful events, but also other beautiful and generous experiences: people in Le Chambon who helped us get off the mountain and on our way. Not surprising, since this town is famous for having saved hundreds of Jewish children during the war, hiding them or sending them on to safety. That night, I went to bed, safe and alive and warm. (And covered in important reminders, apparently). 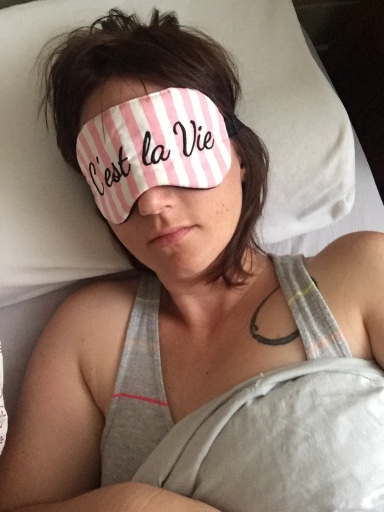 One of the gifts of being a writer who travels, and a writer trying like hell to be mindful, is that you get the opportunity to experience some pretty awful shit and then see the beauty in it. And I feel, so often, that that’s what we’re trying to do as writers. We’re trying to say, “I know it’s hard. But look. Look.”

I’m now in the UK, hard at work on the book. I’ll keep sharing my adventures and would love to hear about yours.

Sending love from across the oceans and rivers and hills and spires….

As usual, you can sign up for my newsletter to get your free 7-Day Meditation Starter Kit for Writers.

The newsletter = special downloads of guided meditations and worksheets, discounts on my courses, creativity and mindfulness hacks, and access to my Inspiration Portal.

Welcome to my blog! Grab a pint or a cup of your favorite brew and stay awhile.

Snag The Get Clear Worksheet: Clarity on where you’re at as a writer and where you want to go.

There was an error retrieving images from Instagram. An attempt will be remade in a few minutes.

The Next Right Thing

Let’s Make Some Magic Together!

What I Write I About

This is my virtual tip jar! My mindfulness for writers offerings and writing resources are from my heart to yours. Anything you can give in exchange is much appreciated! xoxo